Enter your City name or Pincode

Bhilwara is a district city in the Indian state of Rajasthan. The district headquarters of Bhilwara is the seventh largest city in Rajasthan and is better known as textile city of India owing to many textile businesses operating from here. There are also many mineral industries here. There are seven sub-divisions in the district that are further divided into 16 Tehsils. It is one of the cleanest and greenest cities in India. The city is also the most irrigated in the state of Rajasthan due to many ponds and dams here. The city of Bhilwara is home to many popular destinations of tourist interest. 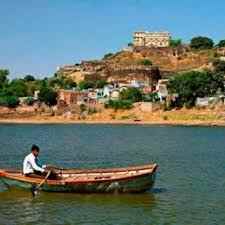 The city has geographical coordinates of 25.35°N 74.63°E with an average elevation of 421 m or 1381 feet above sea level. The city is bordered on the north by Ajmer district, on the east by Bundi district, on the south by Chittorgarh district and on the west by the Rajsamand district. Banas, Bedach, Kothari, Khari, Mansi, Menali, Chandrabhaga and Nagdi are the major rivers flowing through the city. Per census of 2011, city had a population of 2,410,459 with a population density of 230 inhabitants per square kilometer. Well connected by rail, road and air; state highway of Jaipur - Udaipur passes through the district. The nearest airport to the city is Udaipur which is around 171 KM from here. Also a broad gauge railway line connecting Ajmer through Vadodara, Mumbai and Hyderabad passes through the district city.

It is believed that the city had a mint where coins known as 'BHILADI' were minted and from here name of the city is derived. There is another story that says that a tribe known as Bheel helped Maharana Pratap in war against Mughal Emperor Akbar. Bhilwara is said to have derived from the name of Bheel tribe.

The oldest part of the city, also known as Purana Bhilwara (Patwari Mohalla, Junawas, Manikya Nagar Malikhera), was built in 11th century by building Krishan Radha Temple that still exists today, known as Bada Mandir. In Mahabharata, there is mention of Arjuna having fought from here. Also a town named Mandal, close to Bhilwara, served as the military base for Mughals when they attacked Chittorgarh. The ruins of the campsite still exist and can be seen here today.

Bhilwara is famous for its 'Fad Paintings' that are a depiction of traditional stories on cloth using naturally available colors. The miniature artist Badri Lal Chitrakar hails from the city taking the city to the international map for Indian miniature art. He has been awarded with several awards including the Shilp Guru award by the vice-president of India in 2006. The city has also given many national basketball players to the country. Today Bhilwara also serves as a medical hub in Rajasthan with many popular hospitals here including Mahatma Gandhi Government Hospital, Ram Snehi Hospital and Krishna Hospital. There are many cultural festivals that happen in Bhilwara every year that are worth witnessing. Ganesh Mela, Tejaji Mela, Swami Bhoj ka Mela, Dev Narayan Mela and Harni Mahadev Mela are some of the popular ones.

The major industry in Bhilwara is textiles with more than 850 manufacturing units in the town. The main textile product manufactured here is the synthetic fabric used in trousers. The city boasts of producing more than a million meters of trouser fabric per annum. The city is also a major textile export house with more than Rs. 270 crore annual exports. Also Bhilwara is the only center in India producing insulation bricks with more than 33 units. The city also serves as a major mining center with large scale mining of sandstone, soap stone and other minerals like feldspar, quartz, China clay, etc happening here. The city is also recognized today as major Iron ore producing hub.

Are you a Business Owner?

Add the products or services you offer